October was the month of Medellin Gourmet, which is why the Medellin Foodie Group decided to chose one of the participating restaurants for their meet up. The majority of the members voted for Antika, a high end restaurant in the Los Balsos area in Poblado. We shared food, wine and a nice conversation.

… but what did the Medellin Foodies think about Antika restaurant… 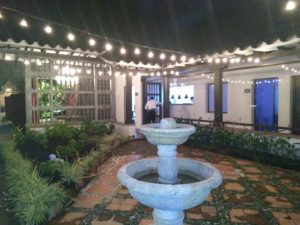 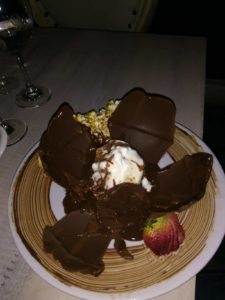 I thought my entrée was delicious, but not enough prawns to share between 2, my main course of gnocchi was great with the meat cooked well, and finally the dessert was the star of the show, with wonderful presentation and so tasty that I ate it all even though I was full already!
Overall I had a good experience, but for the price was hoping for something a little more special, and more attention to detail from the staff. 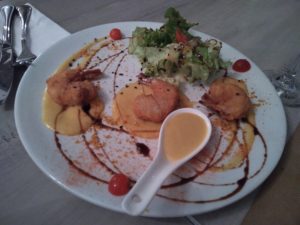 I shared the Medellin Gourmet Menu with George. As starter we had the Carpaccio de Res. I was a bit disappointed, it had way too much lemon juice on it and the cheese was not grana padano or parmesan cheese as supposed to. As a main dish I had the risotto di manzo with solomito. The risotto was good, the texture and the flavor were on point, the steak was tender and well prepared. The highlight of the menu was definitely the dessert. We had the esfera de chocolate, a ball of chocolate, with an brownie and ice cream in the interior.

The service was okay, the waitress was friendly but there was some confusion with the dishes we had ordered. The best about this restaurant is the venue. It’s located in the hills of Los Balsos/Poblado in a beautiful old mansion. The interior is nicely decorated and the also have a beautiful, spacious terrace.

Perfect place for a special wedding or anniversary event. I had gnocchi in Alfredo sauce with chicken. It was very good. The langostino appetizer was slightly fishy. Terrible choice of blasting music, not conducive to conversation or atmosphere.

I agree with Pat. The room was lovely. But the langostino was a little off, like it had been sitting around one day too long. I had the chicken and it was tasty but nothing really special. The music was indeed too loud but I think that’s common in so many Colombian places. Loud = better. The wine they served was very good; between me and Kate, we polished off the whole bottle. The highlight has to be the dessert. A hollow ball of milk chocolate, the size of a small cantaloupe. The server pours very hot fudge over the chocolate globe and it starts to melt. As the chocolate melts, t reveals inside a scoop of vanilla ice cream sitting on a chocolate brownie. All surrounded by what is left of the chocolate globe, the pieces of which are swimming in hot fudge. The taste was great, not too sweet, but the presentation was over the top. 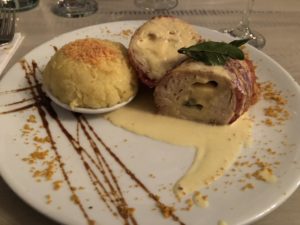 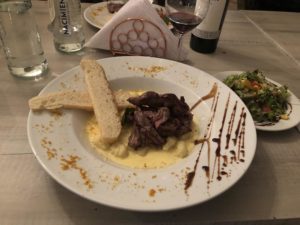 Antika is a beautiful restaurant. Unfortunately, if you are vegetarian or vegan, like myself, there are zero options for you. So I ordered the tomato soup as a starter, but it had a bunch of cheese in it, so I let Joel eat it. As a main course, I shrimp salad without the shrimp, which was a mediocre salad at best.

As for the service, it was great. The place was pretty full, yet the staff was very attentive and our food came in a timely manner.

The best part, for me, was the wine and the service.

The restaurant is beautiful and spacious. The service seemed a bit uncoordinated as if all of the staff were new or training. The food was average but not something that will stay in my memory for too long. The chicharron and plantain chip appetizer was decent but the chicharron could have been warmer, crunchier and less chewy. I have no complaints about my main dish – pasta and solomito. The meat was cooked properly and came out medium as I asked. I left feeling very indifferent – I have nothing bad to say but equally I wasn’t given any real reason to want to recommend someone to eat at Antika. 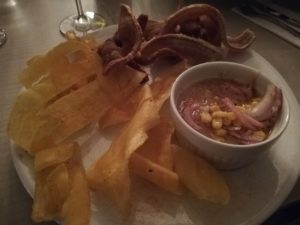