UPDATE: as of August 2018 this restaurant doesn’t exist anymore. 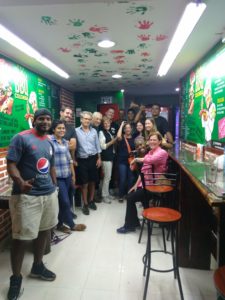 On Tuesday, June 12 the Medellin Foodie Group got together at Binky’s BBQ, a new American style BBQ place located close to Parque Lleras in Poblado. Owner Binky, who is a member of the Foodie Group himself, welcomed us with some tortilla chips and his delicious homemade guacamole. What did the Foodies say about the cooking skills of their fellow Foodie? Everyone took a moment after the dinner to review their experience.

I had a half rack of ribs with two sides, potato salad and coleslaw. The half rack of ribs was delicious, the meat fell off the bone and the BBQ sauce was unbelievable. The potatoe salad was the best I had in years. It had a little bit of spice and was just delicious. The cole slaw was a little mayonnaisey for my taste but all in all it was excellent food and I ate all of it.

I had the half a rack of ribs with two sides. I wanted to get cornbread but unfortunately they didn’t have cornbread tonight, so I got baked beans and coleslaw and it was both super good. It’s very  americanised, I felt like I was back home in the US. The ribs fell right off the bone, delicious, with a great sauce. You don’t leave here hungry, I’ll tell you that. The folks are really nice. It’s just a tiny little hole in the wall but it’s a great place so I’d come back.

The place is a little bit small for a big group but the owner is a really nice guy. We had a little chat and he was so nice to make me a special combo with BBQ chicken and ribs and made me a special price. It really filled me up. The sides were great, the beans delicious. The ribs were falling off the bone, lots of sauce. It seems to be a really nice place to eat. 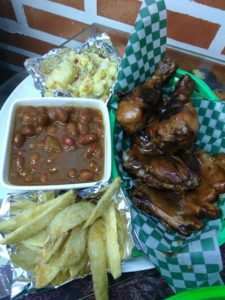 I had the half rack of ribs with Binky’s fries and BBQ beans. Everything tasted amazing. The ribs were really really tender, they fell off the bone. The portion was massive. I really enjoyed the food and the company and I really hope his venture takes off really well because Binky deserve it.

I had the half rack of BBQ ribs with mac & cheese and coleslaw and a bowl of chilli cheese. Everything was great but I especially enjoyed the ribs. Like the others already said, they were super tender and the BBQ sauce is just out of this world. The coleslaw was also very tasty, not as sweet as they make it in most other places here. Binky is a great chef and host. I will definitely recommend the place and come back soon. 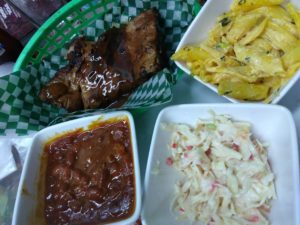 I had the half rack of ribs and two chicken thighs. As side dish I had the baked potato and coleslaw. I liked everything but what I liked most were the ribs. I loved how they fell off the bone. The portion was huge, especially the baked potato. The only thing that I didn’t like so much was that the inside of the potato could have been cooked a little more. The restaurant and the flavor of the food were great.

We are here at Binky’s BBQ, which is really just a little hole in the wall. If you are home sick and need some good American BBQ, this is the place to come. The ribs fall off the bone. That’s what I had, the BBQ ribs. Some others had the chicken, that looked just as good. I also wanted to try the coleslaw but I couldn’t even finished the ribs. It’s a big portion and it came with two sides. I had mac & cheese and the baked beans, they were really good.

I had the BBQ half rack with the potato salad and the macaroni and cheese and it was absolutely amazing. I met a lot of cool people here at the meet up and the food was absolutely delicious. We also got to talk to the restaurant owner and I’ll definitely come back.

The food here at Binky’s was excellent. I had the BBQ chicken, that looked like it had chocolate sauce on it. As side I had the baked beans and coleslaw. The chicken was moist and the combination they recommended was superbe and I’d come back again. 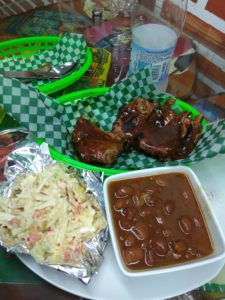 Shanika and I shared 3 vegetable side dishes and they were all really nice.It’s a fantastic place, great vibe and I’d love to go back.

I had the BBQ chicken with Binky’s battered fries, both were really good. The flavor on the BBQ sauce was excellent. The chicken was nice and tender. I enjoyed that. The people I was sitting with also really enjoyed their food. The menu is quite extensive so I’d like to come back and try some other food. I see there is cajun on the menu and I’d like to try that. The food was very good and I’m glad I came here today.

I had the half order of ribs which fell right of the bone. I also had wonderful beans and an excellent coleslaw. It felt like I was right at home. I was great soul food and I’ll certainly come here again.

I had the BBQ ribs and the BBQ chicken with coleslaw and mac & cheese as sides. It was really good. The flavor of the BBQ sauce was amazing, the ribs were really tender and the chicken had a nice crispy grilled skin and was moist inside. I will definitely come back here.