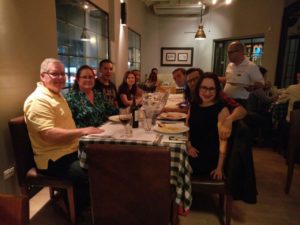 On Thursday night the Medellin Foodie group went to Il Castello, a famous Italian restaurant located in Poblado, on 10th street. This is what the foodies had to say about the food, the service and the restaurant in general:

Andrew: I had the Gnocchi Rosetta, I never had it before, but I liked it. I saw that Brian, the chef, was ordering something similar. It came with Alfredo sauce, which I really liked. To drink I ordered a Gin Tonic, not with the normal Soda because it’s full of sugar. I ordered it with Club Soda and it was good. As an appetizer I ordered Bruschetta, which were also good. They used a different type of bread, seemed like an Italian style loaf of bread, regardless it was good. I would definitely come back. 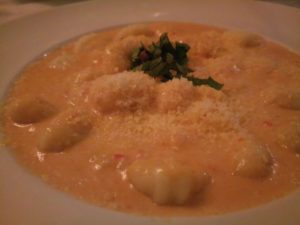 Carol: I ordered the Fettuccine Maramonte, fettuccine in a cream sauce with artichokes and shrimp. It was very good, I would give them 5 stars. The bread was also very good. It’s a beautiful restaurant, my only complaint is that it is a little loud in here. I can’t even hear myself think haha, but I would definitely come back.

David: I ordered the Penne Vodka, unfortunately my order came very late and I think the vodka sauce was more an alfredo sauce. The bottle of wine I ordered, a Chianti, was excellent.

Maria: I had the Panzotti Firenze, it was basically like ravioli, spinach and ricotta with 3 cheese sauce and roasted almonds. It was delicious.

Juan Carlos: I had the Ravioli Bolognese, they were pretty good. I haven’t had a lot of Italian food since I’ve got here, so it was kind of nice. I liked the restaurant, great location.

Brian: I had the Calamari as en entree which weren’t impressive to be honest. They were probably frozen and breaded and the marinade red sauce was a bit watery. The Gnocchi Tuscany I had, which were green with spinach or basil in a 3 cheese sauce, were quite good. The bread they served on the table was also really good. It was a pizza bread with pesto on it. If I had tasted that before ordering, I would have probably ordered a pizza. In general it wasn’t bad.

Silvia: I had half a plate of Sorrentini, a filled pasta, kind of like a big ravioli. One half was with 3 cheese and and the other half had Amatriciana sauce. I really liked the Amatriciana sauce, it had a nice tomato flavor, crispy bacon bits and some spice to it. I also had half of a pizza, one with Jamon Serrano, mushrooms and broccoli. The pizza looked better than it tasted, it was lacking a bit of flavor, and maybe some herbs. It was a thin crust pizza, Italian style but for an Italian restaurant with such a good reputation as Il Castello I expected a bit more from the pizza. Especially for that price, most pizza and pasta dishes are 30,000 COP and up. For dessert I had the tiramisu, it was good. I tasted the Amaretto and the coffee but I don’t think they used mascarpone for the cream. The ambience of the restaurant is nice, the service was okay, the pizza came out very late, after everybody else had already finished their meal and they also messed up David’s order. 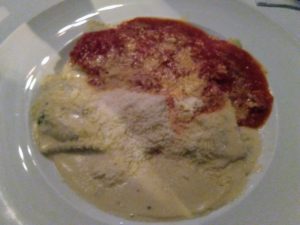 Jorge: I had Sorrentini, kind of like raviolis with two different sauces, a red sauce and a white sauce. It was pretty good, I liked the white three cheese sauce better. I also tried some pizza, didn’t really like it that much. It was not bad but I expected something better at a place like that, but in general I enjoyed this meal. 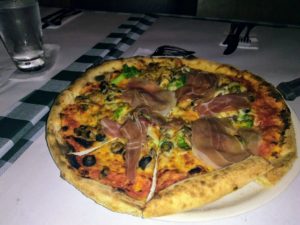