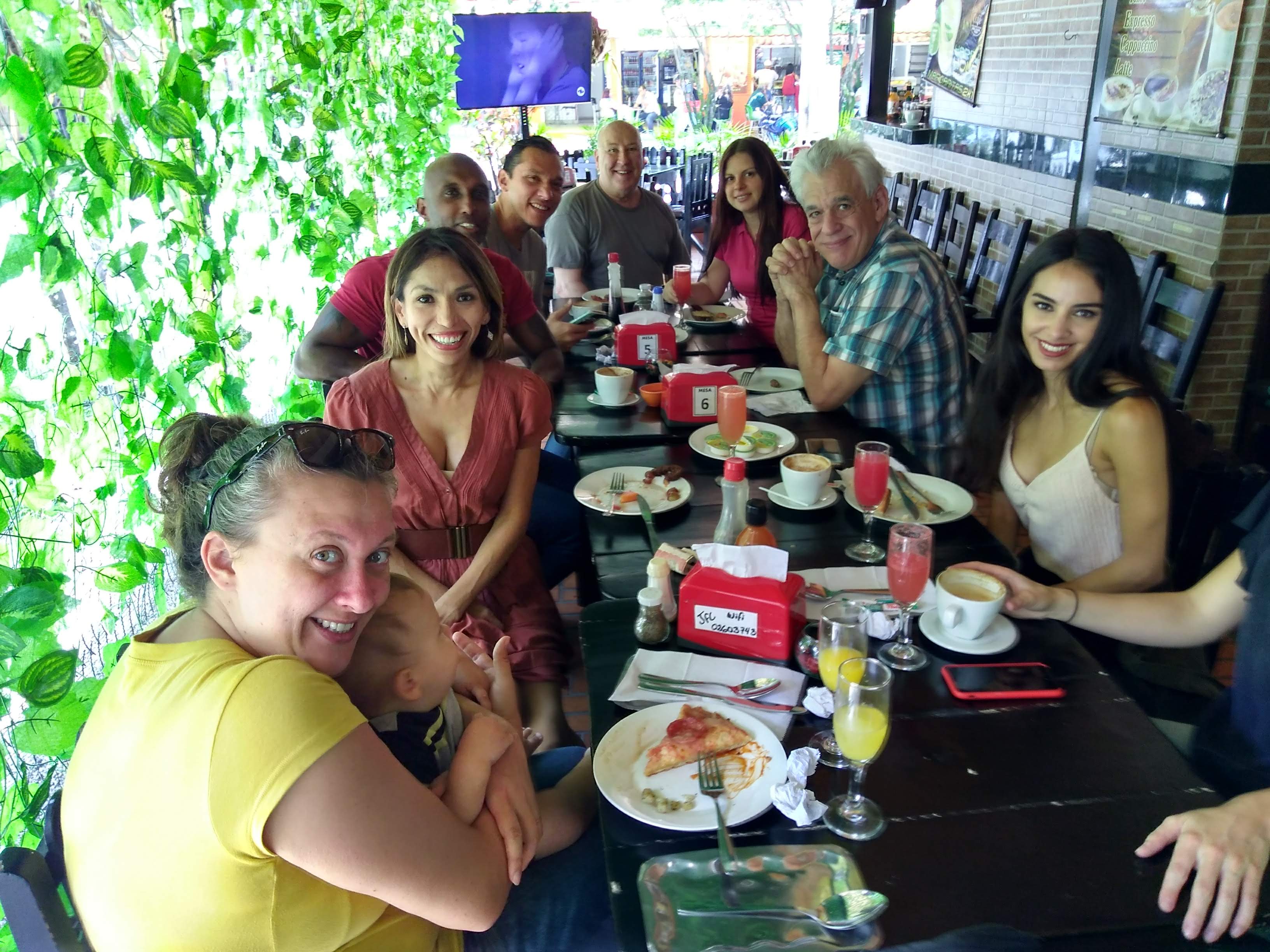 On Saturday morning (Sep. 1, 2018) the Medellin Foodies Group met up for Brunch at Juan Fredo Cafe, close to Suramericana Metro Station. This cafe usually only offers an all-you-can-eat buffet style brunch on Sundays, but they made an exception and organized a special Saturday brunch for us. Lexxy, the former owner of “El Viejo y El Pancake” is a consultant for Juan Fredo Cafe and was the one who welcomed us.

About ten foodies attended the meet up this time, read what they said about the food, the service and their overall experience at Juan Fredo Cafe’s Brunch buffet. 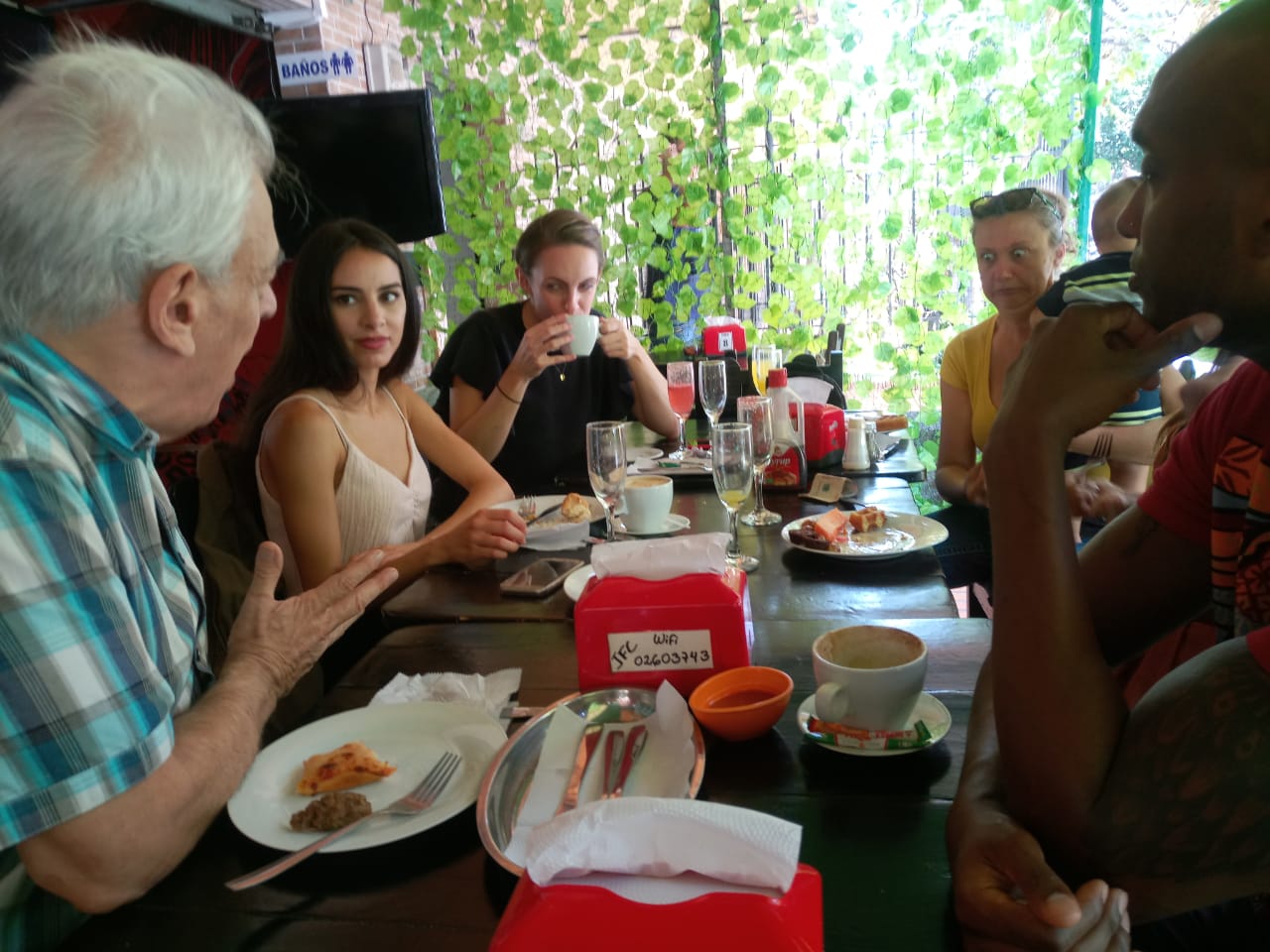 I was really surprised by the variety of different breakfast dishes they had. It was a buffet style brunch and you could really eat as much as you can. Additionally, everyone had three mimosas (watermelon or orange) and three cappuccinos. I had an omelet with tomatoes, onions, and cheese, a slice of pizza, a pancake, some fruit salad, potatoes O’Brien, a hash brown, a biscuit with gravy and some Cesar salad. A little later I had some lemon cake and a brownie. That was by far not everything they had, but it was all I was able to eat in those 3 hours we spend at the restaurant. 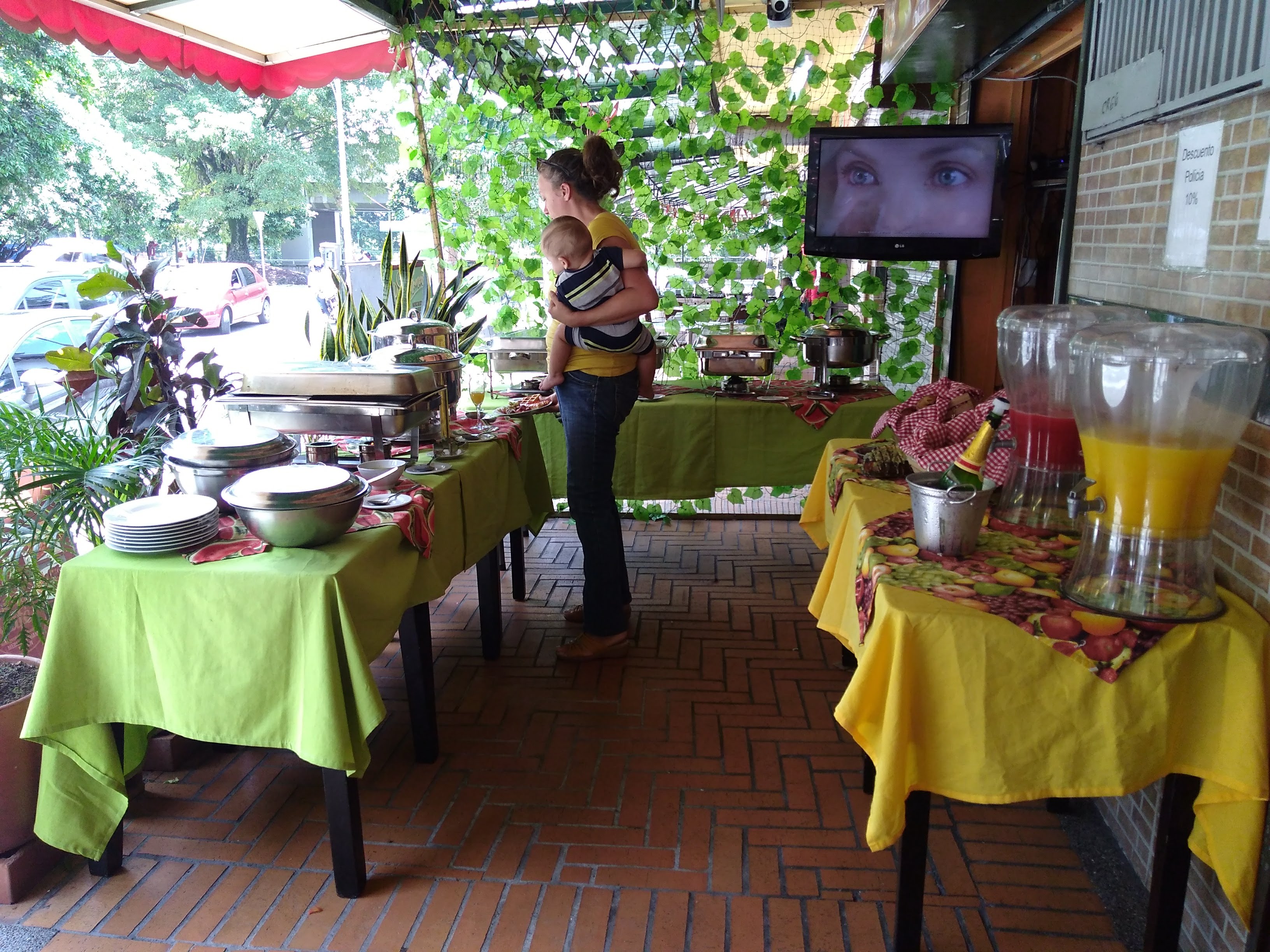 The food was all fresh and tasty. The mimosas were also delicious, the cappuccino was alright, but had a little too much milk for my taste. The service was very nice and attentive, but we were also the only table. The brunch was 40.000 COP which I think is worth it because they really had a lot of food and the mimosas were great. Overall I would say, Juan Fredo Cafe is a good option if you are looking for an American style brunch buffet in Medellin. 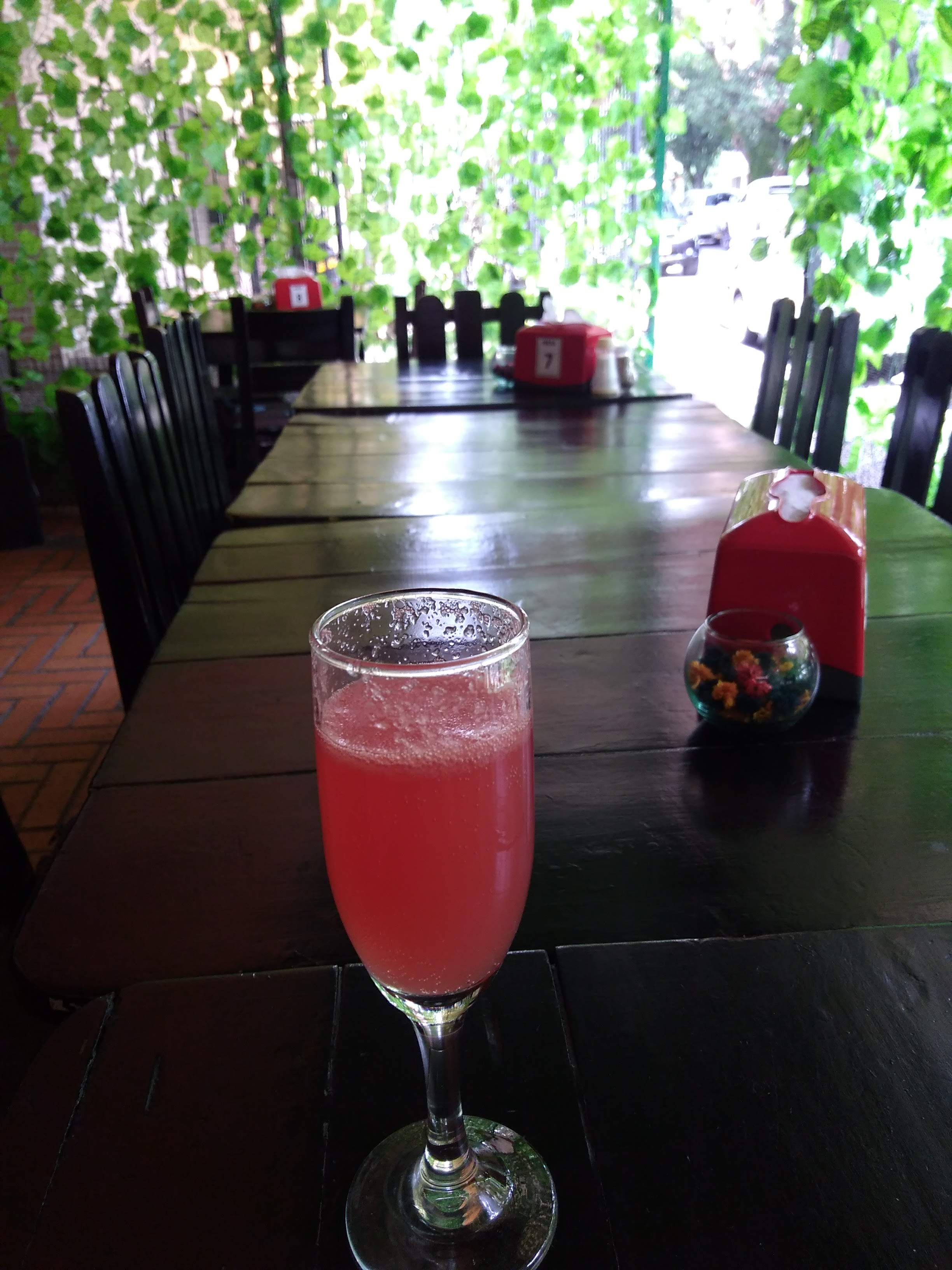 I think it’s great value for money they offer! The buffet was actually way bigger than I expected. I liked the fact that the eggs are freshly made, this is a big pro as I hate it when there are scrambled eggs sitting for a while somewhere and many restaurants do that! The sweet section was awesome too, I especially liked the pancakes besides that I think mini muffins are a good idea. I also very much liked the potatoes. I was wondering if the juices were fresh? It tasted like this 🙂 Which is another big pro.

In general, I loved the brunch. The staff was very nice and attentive actually! I don’t know many restaurants here where the staff asks a couple of times if you need anything or if anything is ok. Also, I very much liked their style, how they welcomed us and interacted with us! 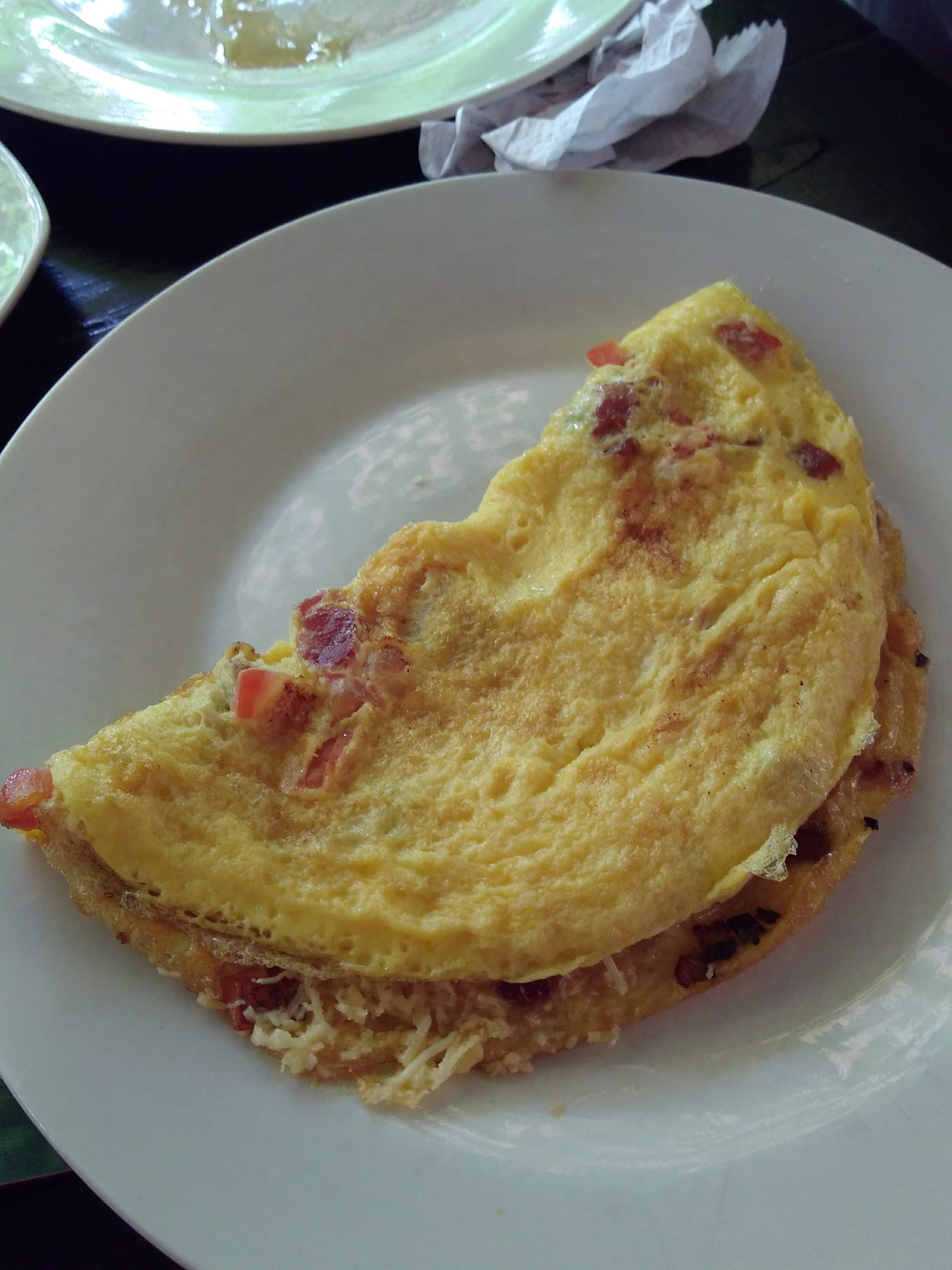 We had a great time at our brunch. A small enough group that we were all able to meet and mingle. This was my second visit to brunch here and it was about as American style as you will find. Come hungry as it is one price, all you can eat. Even includes coffee and latte. Fresh squeezed orange juice with champagne. Or Watermelon juice. Bacon and Sausage. Pizza. Hash Browns. Southern style biscuits and gravy. All tasty and homemade. They are still working the kinks out of the waffles as they do not stay crisp on the steam table.

The pancakes work great though. The syrup is Aunt Jemima’s made with corn syrup. I suggested where to buy real 100% maple syrup (Huevo Mundo). They have a cook to make fresh eggs any way you want them. I had a perfect omelet. And the sweets are all homemade. Lemon cake, brownies, chocolate chip cookies all fresh and very tasty. I’ll be back and I hope the FB group repeats here because it was a very fun time.

Overall O liked the food and service… I tried a little of everything.  I was impressed by the search for ingredients to taste similar to taste in the US. Cooking was underwhelming. The sausage was overcooked to hardness. Should have been made into patties vs attempt at sausage links. Eggs over easy were eggs over hard. 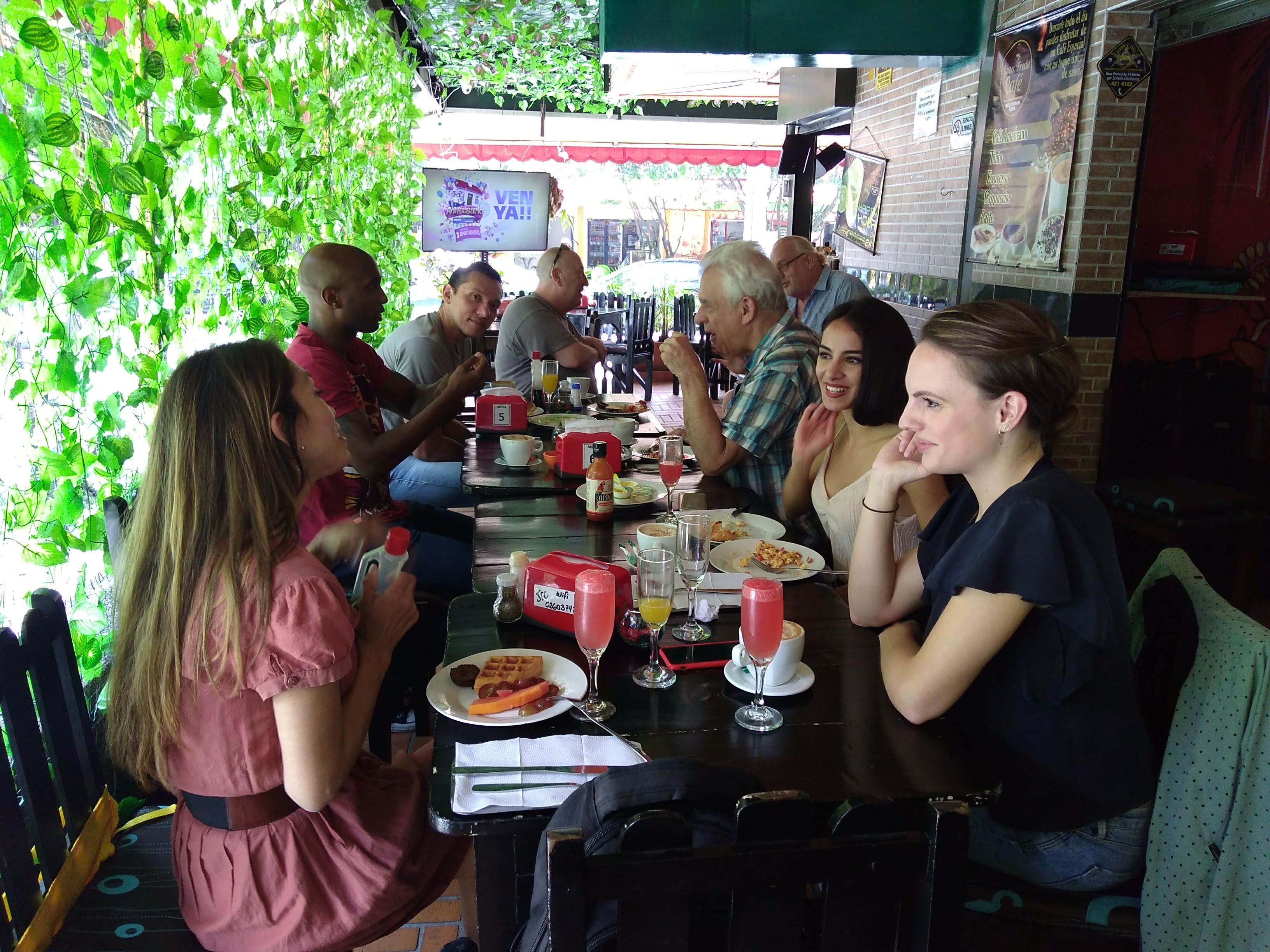 For $40,000 it was really good value, even for a vegan like me. They had vegetable salad, fruit salad, hash browns, potatoes, rice, beans, a couple desserts with no milk or egg in it, and the all-important mimosas (orange juice and watermelon juice.)

Since we were the only people there the staff was very attentive and prompt. The location was easy to find and it’s pretty spacious.

The best part of the experience was our group. We had so much fun shooting the shit, and talking about our lives here in Medellin. I hope we have more foodie meetups like this one in the near future. 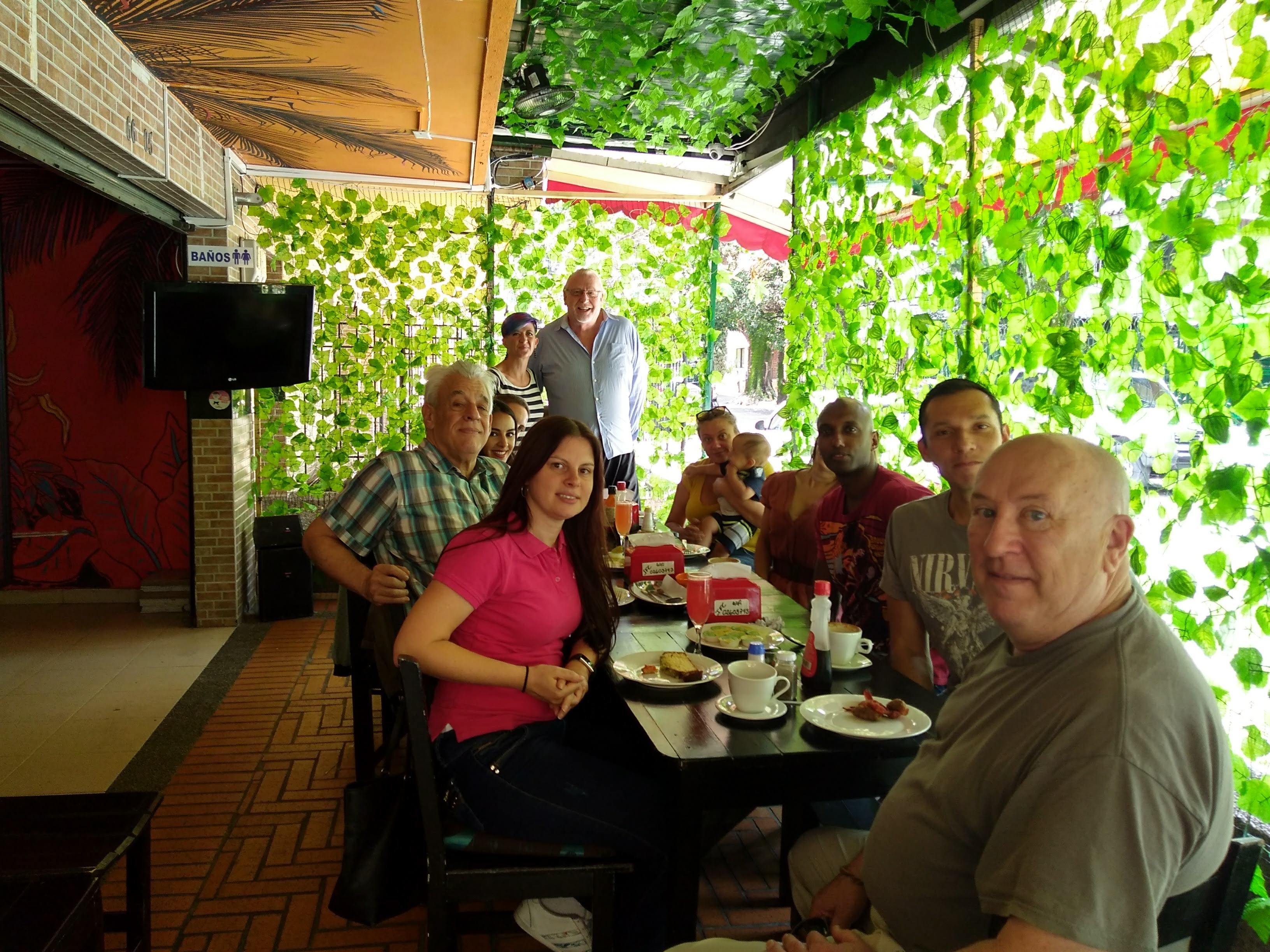 I really enjoyed the brunch. The food and cappuccino were great. There were a few improvements that could be made and management has already taken them into account. Even better than the food was the great company and ambiance. We laughed our assess off.