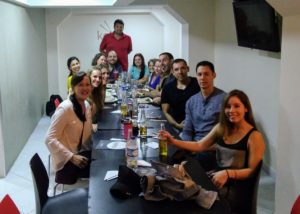 Keiko Sushi & Wok is a relatively new restaurant located in Laureles. We decided to choose this spot for our 25th Medellin Foodie Meet Up because a lot of us were craving sushi and one of hour members is friends with the owner so we got a special deal. It happened to be 2×1 for certain sushi rolls as well, so that was a plus.

Here is what the members of our Medellin Foodie Group think about the restaurant:

Lauren: I really liked the sushi, I liked that it was fried and the sauce on top. The ambiance of the restaurant is nice, not too loud and not too quiet, enough space for a big group like us. I would come back but with a big group, it’s a long wait.

Jeanette: It was okay, it was just okay.

Paola: The first sushi I got seemed a bit dry, the other one had some sauce. I wasn’t thrilled but it was okay.

Allison: The sushi was a bit dry and didn’t have a whole lot of flavor. They had some creative things with different sauces. I guess I would rate it a 6 out of 10.

Debbie: The sushi was really good, but the sashimi tasted strange, I had to send it back. I really liked the atmosphere and the waiter always had a big smile on his face.

Brian: It was my first time ever eating sushi in Colombia, living here for 4.5 years now. One of the rolls had a nice sauce and crunch to it, and the cream cheese wasn’t overpowering. They had no juice when we went and had also ran out of tuna, which was probably a good thing because the other raw fish didn’t look very fresh. But it was better than I expected, and with the 2×1 price on some of the rolls, it was very good value.

Andrew: It’s not the best sushi I ever had but not the worst either. The one I liked the most was the Tiger roll. The spring rolls were good too. What I didn’t like was the service, it took them an hour to get our food out and we are like the only table here right now.

Leo: It was okay. I guess I’m kind of a sushi snob, I lived in Japan for 3 years, but yeah…it was okay.

Silvia: I ordered sushi, one with shrimp, that one I liked and one with salmon, that one I did not like at all. It was a tempura and seemed to me like it had been deep fried. It was very greasy. I also ordered a rice dish to go that I ate the next day, I liked it. In general, I think with the 2×1 it’s a good deal but I would never order one of the tempura rolls again.

Leidy: I liked it. It’s the first time for me to eat sushi

Andres: It was good, I mean not really authentic. They had some really unique creations.

Lizz: I like the food although this is not Japanese food, this is Japanese-American food, it’s a fusion. You can not find these rolls in Japan. I liked the 2 for 1 deal, I wished they would have let us choose two different rolls. I would come back. I think for someone not Japanese, he did a good job. It’s not easy to get the rice right and they have some creative rolls.

Alan: I had a pasta dish with shripm and other seafood. The pasta was similar to ramen noodles. It made for a tasty change of pace. The restaurant is a nice, quiet place, just off the 70 with attentive, friendly service. 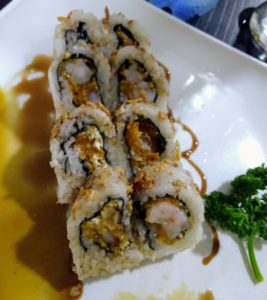