On Saturday, January 27, 2018, the Medellin Foodie Group had a meet up in the new food market “Mercado del Tranvía”, located in the neighborhood Buenos Aires on Ayacucho Avenue.

Here are some of the options of the Foodies that went that day:

It’s admirable and encouraging to see that efforts are being made to bring equal opportunity to all areas of Medellin to enjoy the finer things in life. Such efforts can be seen in the recently introduced state-of-the-art trolley that offers the downtown residents access to modern, beautiful and affordable transportation.

Yesterday, I was able to check out yet another such effort to introduce the Buenos Aires neighborhood residents to new and innovative dining experiences similar to those found in more exclusive areas of El Poblado or Laureles when I joined members of our expat foodie group for lunch at Mercado del Tranvía.

This new dining concept is somewhat of happening thing in Medellin, that allows the diner to enjoy multiple dining options under the same roof, from Peruvian or Mexican cuisine to Mediterranean, Chinese, Pasta, pizza, ribs or steak and others. We had ten people in our group and everyone ordered from a different food stand, so we were able to see and try multiple cuisines.

What was interesting though, was that no one in our group was particularly impressed by the food. The impression I got was that everyone was eating their food as if they felt obligated to do so because they had paid for it and not because they were absolutely loving it. I heard no oohs or has from anyone rather tepid or unenthusiastic expletives. My friend and I ordered the spinach ricotta ravioli from Carbone – Pasta Artesanal, except hers came in a Napolitana sauce, or at least their version of a Napolitana sauce, and mine were in a Bolognesa sauce. Neither was very good, the plate was a runny mess, insipid and lukewarm, lacking appetizing qualities, and the ravioli were hard inside and chewy outside. Very disappointing and very expensive for what we got. I had a side order of roasted vegetables, and my total came to over $40,000. I was shocked to say the least. This was another thing our group found in common – how expensive we felt all foods were. Which started me thinking.

So, while it is admirable that these efforts are being made to bring equal opportunity for the finer things in life to less opulent areas of Medellin, it must be said that unfortunately these efforts to be more inclusive lose their intended purpose when the average cost of a meal in Mercado del Tranvía is considerably higher than that of the rest of the local restaurants this part of town’s residents are able to afford. When I came to that realization, I lifted my head to look closely to see what kind of diners were patronizing this restaurant, and all I could see was people who were well off and obviously came from elsewhere, not the locals. That saddened me and made me question the likelihood of this particularly innovative and “inclusionary” idea to integrate all the city’s residents or to break socioeconomic barriers. Although the idea is brilliant and the intentions are to be admired, the delivery of it fails to achieve its purpose and accomplishes the opposite. It leaves out those in the neighborhood it aims to include due to economic inequities. 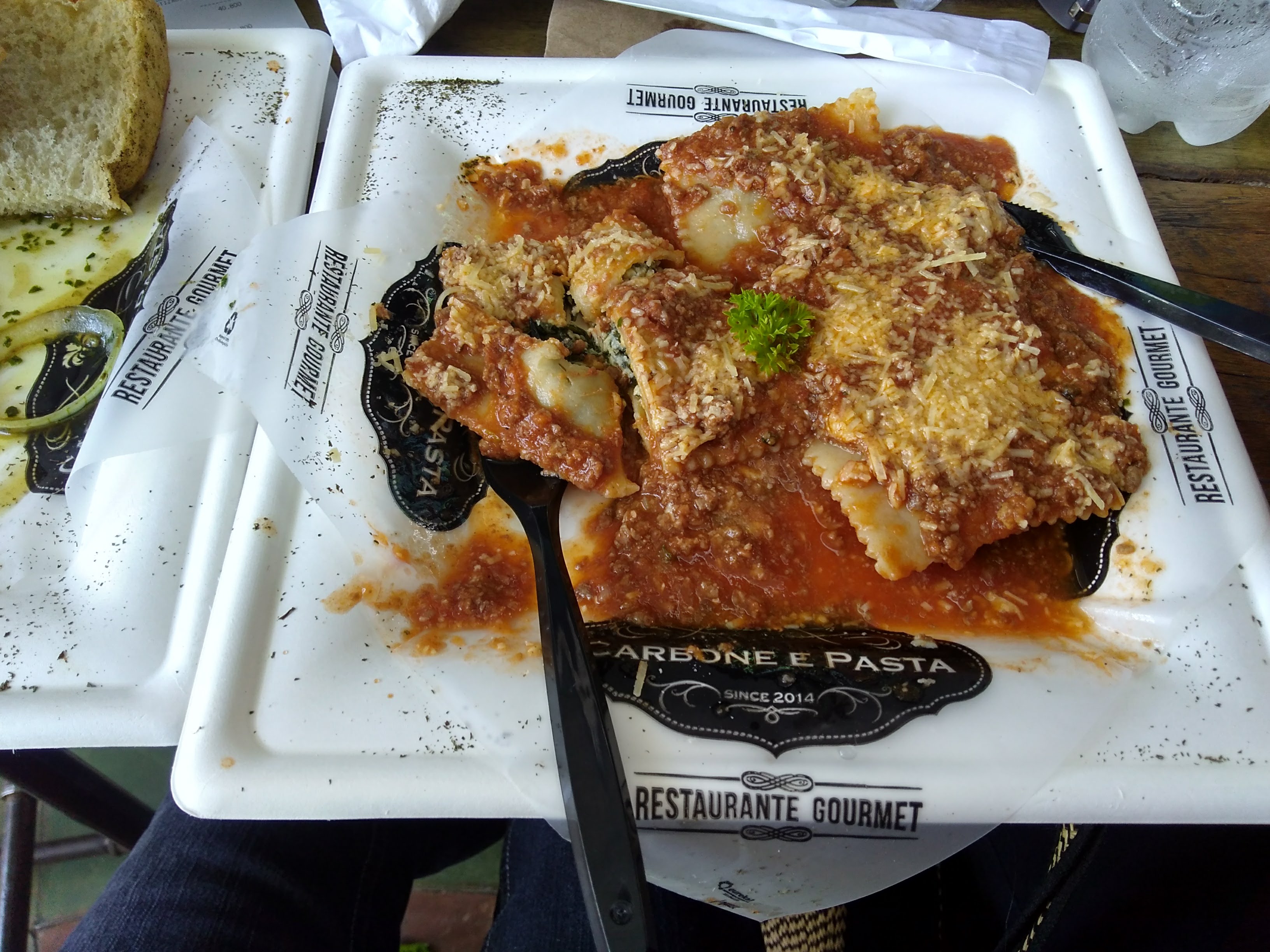 I’m a big fan of the concept of food markets. When the first one opened here in Medellin in Ciudad del Rio I was really happy but when I went I was a bit disappointed. Many of the food stalls there are chain restaurants and the food seems a little overpriced.

At the new Mercado del Tranvia it is similar. You’ll find fewer chains there but the food is a little pricey for a lower income neighborhood. Nonetheless, I really like the concept to have a food market there in Buenos Aires as it gives the people the option to try food from different countries that you usually don’t find in the area. It’s an old building with an open concept, nicely decorated, there are tables on two floors and about 15 different food stalls. I think it’s a good place to meet with friends or family for quick meal or drinks.

I ordered mixed sauteed vegetables with chicken at “Lumpia”. The plate cost 16.000 COP and was a good low carb option as it came without rice. The food was okay, that is honestly the best word to describe it. It was nothing special, just some mixed vegetable with chicken in soya sauce. After lunch, I had a Cold Brew Coffee with milk at the coffee place in the market. Same verdict here, at 6.000 COP not particularly cheap but not bad either.

In general, I would say the Mercado del Tranvia is a nice option to meet up with friends and to be in a different neighborhood for a change of scenery. I would not come here for the food, I don’t think the options are that great and in general everything there is slightly overpriced for that area. 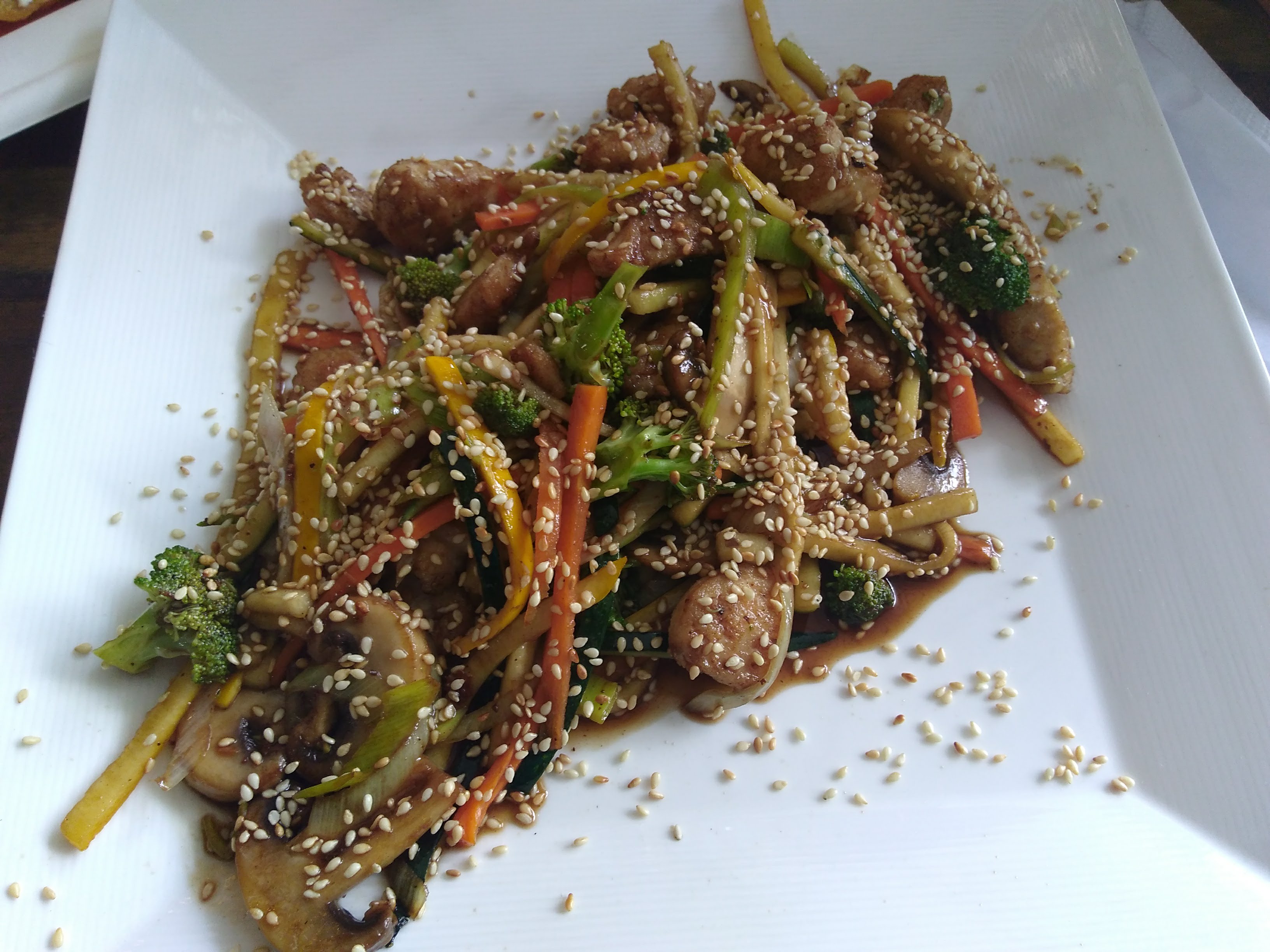