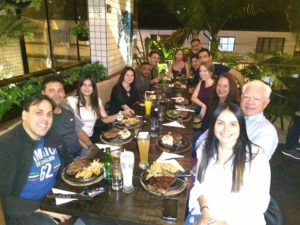 On Sunday evening (May 20, 2018) the Medellin Foodies Group met up at restaurant Voraz in Laureles. The restaurant is located on the second floor, above La Brasa Roja and next to La Causa. 14 people showed up for the meet up. We had ate good food, met new members and had interesting conversations. How did the Foodies like Voraz? Read what they said after dinner about the ambience of the restaurant, the food and the service:

I had the Baby Beef with pasta in a white shrimp coconut sauce. Baby Beef is a cut of beef here in Colombia, it’s not veal, just as a quick explanation for those who are not familiar with the term. The steak was perfect, flavorful, juicy and cooked right on point (I ordered it medium). The pasta was nice but I didn’t see or taste any shrimps in the sauce. The service was not bad. At the beginning they seemed a bit unorganized but they surprised us when they managed to serve all the food at the same time and to the right person. The ambience of the restaurant is nice, everything is green with lots of plants. It’s rather stylish, not too formal, no table cloth, paper napkins, people dressing casual. They clearly focus on steak as they have a nice selection of local and imported beef cuts as well as different side dishes to choose from. The steak dishes start at 35,000 COP, so for Colombian standards this place fits into the middle-higher price range. 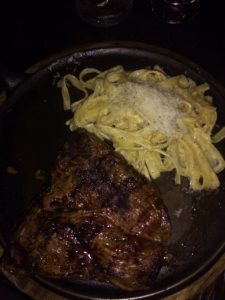 I had a Ribeye Steak. It was really tasty with a nice texture. It was cooked on point. The side dish was Risotto, which wasn’t anything spectacular. The side was also quite small compared to the meat porcion. I drank a Lychee Lemonade which was good as well. Now I’m waiting for my dessert, we’ll see how that is. I would definitely come back for the meat. 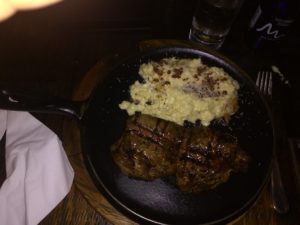 I had the BBQ Ribs, which were pretty good. They came with the “House Salad”. I like the salad, it had an interesting slightly sweet dressing that gave a different touch to it. I really like the dish and I would totally recommend it. 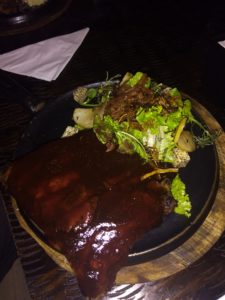 I had the Solomito con Piemienta. The sauce was really good. I ordered my steak ¼ which can be a hit or miss but it came out perfect, really soft and cooked well, meaning it was warm even thought it was rare. I was really impressed that the waiter remembered what dish was who’s. My side, Milhoja de Papa, was also nicely done. I’m really happy and I would come here again. 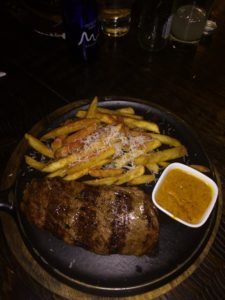 I had a soup, I think it was with corn, coconut and ginger. I was the only one who didn’t have meat because I’m recovering from a cold. I really enjoyed my soup, it was a very interesting combination. I was able to taste some of the steak dishes as well and they were excellent, well cooked with a great flavor. Overall I was really happy with the meal. 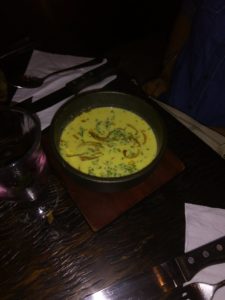 Katie and I were the first to come into the place and the guy who welcomed us seemed pretty nice, he even brought us an extra table as I told him there might be a few more people than expected. When the rest of the crew started showing up, another guy was assigned to our table, to be honest at first I didn’t like him, he did what he had to do, no more than that, though at the end he was nicer and helpful. As for the food, good thing it all came together since there were 15 of us. I ordered a New York steak, 250g of one of the best cuts of meat I’ve ever had! Juicy, tender, and a thin layer of crispy fat, glorious to my palate. I also had a side dish called “milhoja de papa” which was a sort of stack of several layers of potatoes and some cheese, it was good but was not something I will order again. I tried the baby beef that Katie ordered too and it was great quality as well as the rib eye Brian shared with me, I have nothing but good things to say about the quality of the cuts! 4 out of 5 stars

I had the medium sized Baby Beef with Risotto on the side. I really liked it. It was medium done and perfect how it was cooked. It came with Chimichurri that was great. The Risotto was great as well. I liked that they served everyone at the same time, so no one was waiting all hungry or jealous, haha. 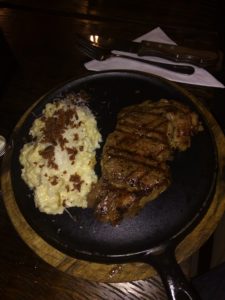 I had a Ribbey and salad. The salad was amazing. The Ribbey was really flavorful, it was a little grizzly but really good. 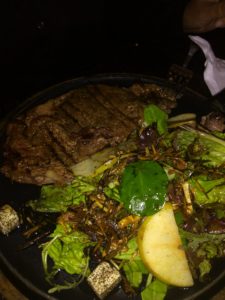 I had the Bife de Chorizo, it was an excellent steak, cooked very well, very flavorful. As a side dish I had the Risotto which was okay.

I ordered the BBQ Ribs, they were very tender and flavorful. The ribs came with fries.

I had the burger, it was good. It came with French Fries, they were herb coated with Parmesan cheese. I would definitely come back and I’ll recommend the place, it’s beautiful. 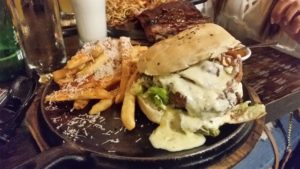 I had the Ribeye steak with fries. I have to say it’s the best Ribeye I’ve ever had in Colombia, I haven’t gone to Bogota but definitely in Medellin. The meat was imported, I think that’s the key point. The Ribeye that they make from the local cuts, I think are not as good. It was great, really juicy and I totally recommend it. The service was okay, I think they could improve it, especially for a bigger table. 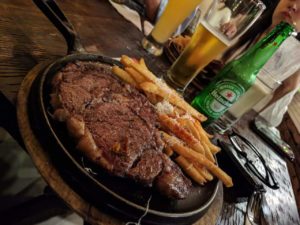 I ordered the Ribeye with Risotto. The Risotto was okay I guess, I was expecting more. The Ribeye was great, really perfect. For me it was also the best Ribeye steak I ever had here in Colombia and I have tried it at many places. Concerning the service, I think they need more waiters, but I will definitely come back here next week.